Album Liner Notes: It’s been over half a decade since the words Dumpster and Archeology were slung together for a strange project that has been lovingly called ….a multidimensional rabbit hole.  Indeed this moniker has been used on social media, for 3 websites, 2 publications, 4 art installations, 50 plus articles on Medium.com and a Documentary. Seems it might be time for a greatest hits.

Dumpster Archeology is a weird creation that has a Creator in local artist and “space-maker” Lew Blink. He would go on record saying the whole thing is basically “a punk Indiana Jones trash adventure with National Geographic zine motifs, public spectacles and the DIY aspect of a Dumpster Diver.” He also seems to think the whole Project progresses on its own, as if the ghosts found in the trash , do most of the work. A bit strange to say the least, but as Hunter S Thompson had a major influence on Lew, separating fact from fiction isn’t the point…. you either enjoy the madness or move on.

Buffalo Springfield’s Retrospective Album and iconic cover art would be an influence on this Retrospective. According to Lew Blink, their song “Expecting to fly” is a theme song to this moment in time and if that feels Meta, then welcome to the Multiverse. This is Alice in Wonderland and the deeper symbolic elements become epic allegorical figures in the Dumpster Archeology story. Ironic the connection with Fear and Loathing in Las Vegas and Hunter’s alter ego Raoul Duke. We suspect the meaning has something to do with the fact Hunter wrote about true events and people, but fictionalized the history because as we fear … true reality is far more bizarre.

At the heart of Dumpster Archeology is a simple ancestral remembering, an effort to not lose track of our stories, our legacy and to find a way to honor what was almost lost.  This Retrospective is an experiment in piecing together a doorway to a multi-dimensional rabbit hole.

The Origin Story of a Dumpster Diver

The Beginning: from the notes of Lew Blink

What I found in a dumpster that day in October (2015) was amazing and lead me deeper into the history of Dr. George Seib and the house at 2323 Lafayette Drive. So enticing and strange was the discovery that a week later I went back for more. I found an epic story that chilly night, and most importantly I found those Reel to Reel tapes.

For months I used the folders and it’s contents to make odd art. It felt natural somehow, as I was inspired by the print history, photography and graphic designs and the Envelope. One day I got a Reel to Reel player, a vintage 1970’s era Sears model, with beautiful chrome buttons and strange archaic audio modalities. Me and a friend sat with a digital recorder to finally learn who Carrie Seib was and why 16 Reel to Reels of her voice was in the trash.

the Reel to Reel tapes

The Reel to Reel Tape began with singing accompanied by a grand piano and violin as voices call out like a popular hymnal in unison. There came a pause, as George says on the tape, “Today is January 20, 1950 and this lecture is being recorded of Mrs. Carrie Seib”…..then Her voice comes through with a thick German accent and the mystery of a Spiritualist comes to the public light.

….and you will begin to understand….do you see?…..the Spirit is within….throughout you and into the universe……

The flood gates opened to a deeper story, of a Psychic, Poet, Spiritual leader and the rather large German family that made their own marks deep into the ancient neighborhoods of the St Louis riverfront. Clearly this was a story that needed to be told.

Confessions of a Dumpster Archeologist

How to tell a story, is the first obstacle any Artist faces, but this was also history and a meta version of our Human Collective Experience already exists in the ether. Death and Trash are the final forms for many material objects in this multiverse but a story can survive in the minds of the Collective.

Magic springs from concentrated effort and I found myself standing with a Strange Folk festival Organizer who points at the beautiful iron fence surrounding Lafayette Square Park and says… that’s your space. By sheer happenstance my Project was tasked with making visual art for the public to experience. A new facet entered the world of Dumpster Archeology……a Art/History Installation.

Strange Folk festival, which was holding a late September date in the Lafayette Square neighborhood, held a strong appeal. I wanted to showcase on the same streets the very real people of the Project walked. To create a storytelling event, a sort of Show and Tell, about the haunted mansion on the block.

After the meeting I walked into the dark street towards a dumpster under lamp light out of sheer curiosity and shone my trusty flashlight downwards from a slight dangling perch. That was the moment outside a 100 year old French Colonial mansion, I found the Arch.

What had this wooden artifact seen in it’s long life as a tree, a house fixture and now…center piece for an Art Project called Dumpster Archeology?

As the reality of a looming public event sunk in, I had no tent, no money and just a love of history to discover over months of research. I did however have an endless supply of material from the Dumpster. Necessity is the mother of invention and a concept developed. Space creation had occupied the last 4 years of my life, so I molded the display around that wooden Arch, the center piece from which the Project grew.

Issue number 1 of the Digital Magazine

A wise violin player I know named Dixon, liked to say…. put everything you love into a grey area…then believe in it…and pretty soon it becomes that which you couldn’t imagine…a new reality. My grey area had history, photography, trash, dumpsters, genealogy and spaces.

Dumpster Archeology grew out of all my favorite things and became something I couldn’t have imagined, something that matured, morphed and took on it’s own energy. That first event, the View from 2323 and the Strange Folk festival really became the template that would be used for every aspect of the Project after it. A natural building of weirdness and energetic magic. 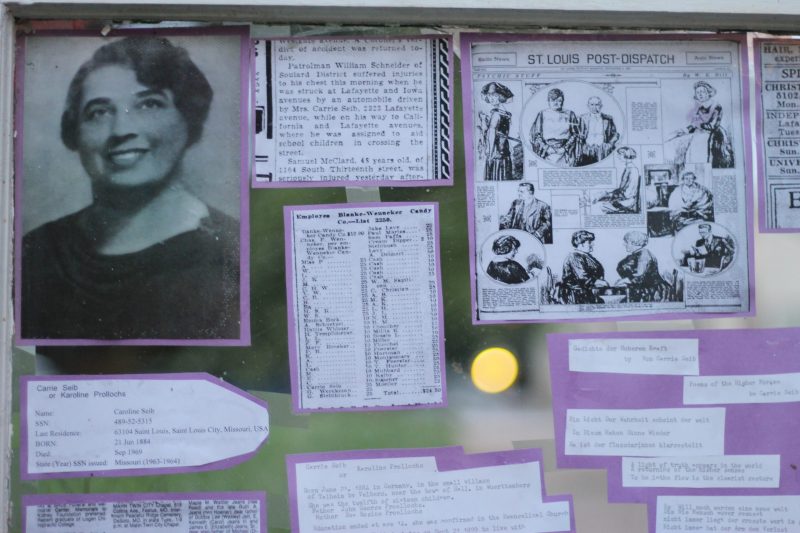 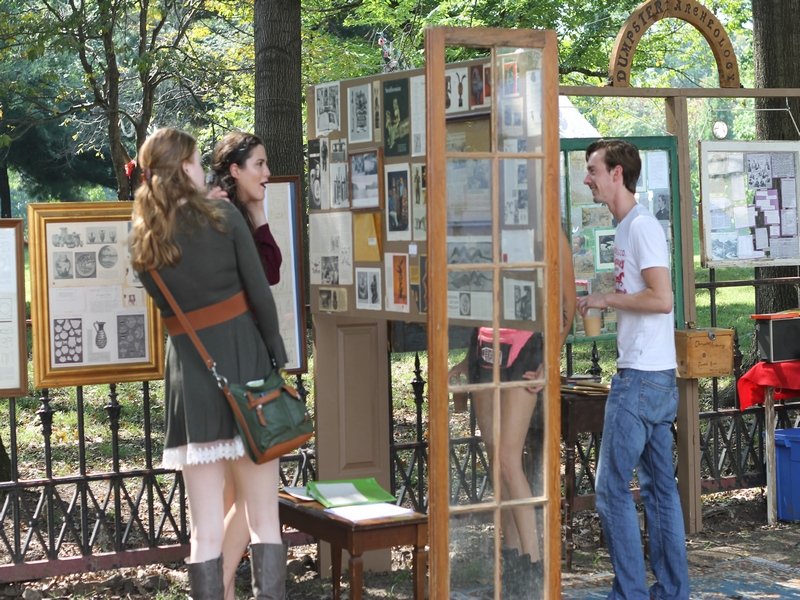 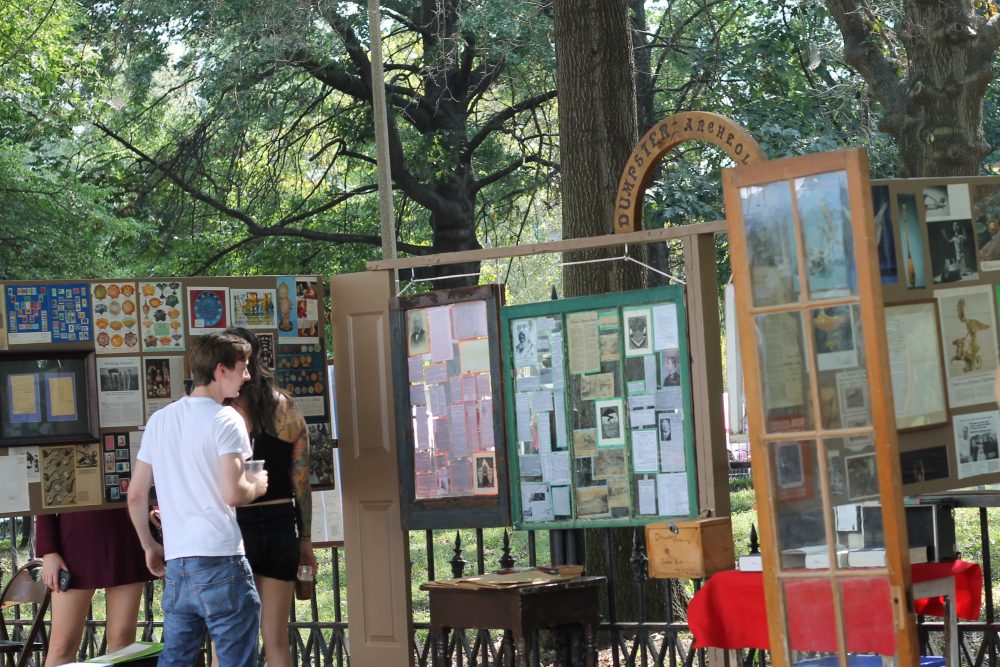 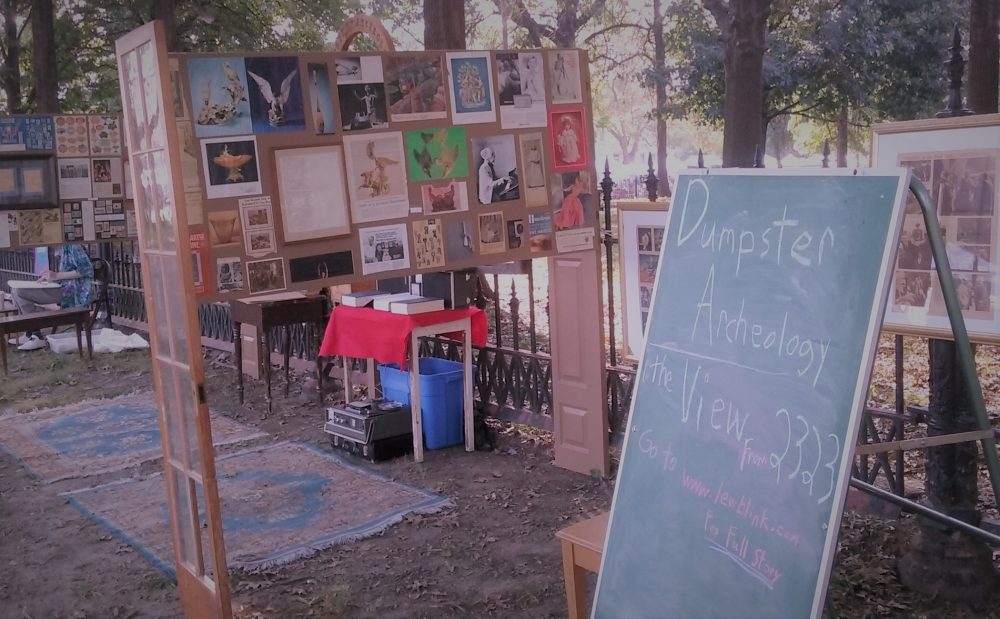 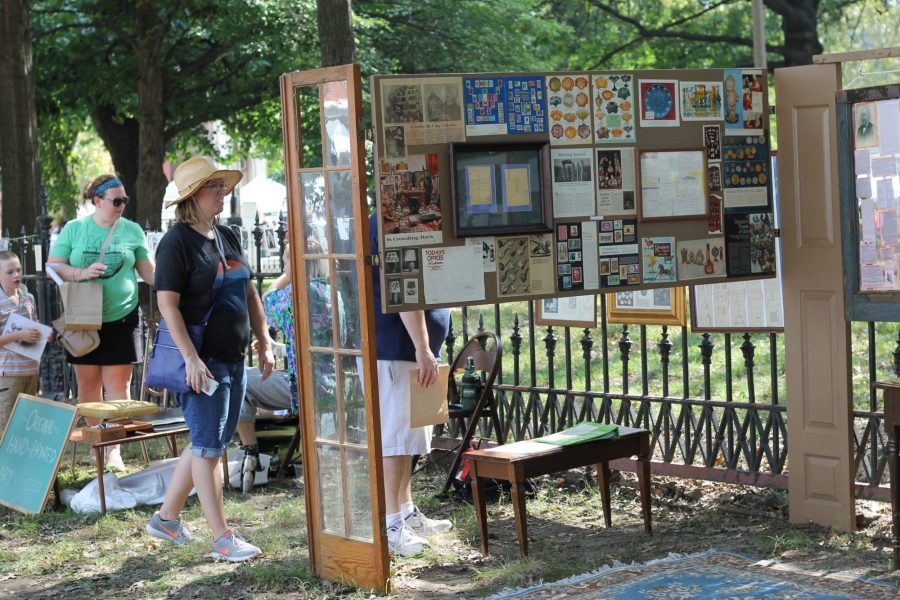 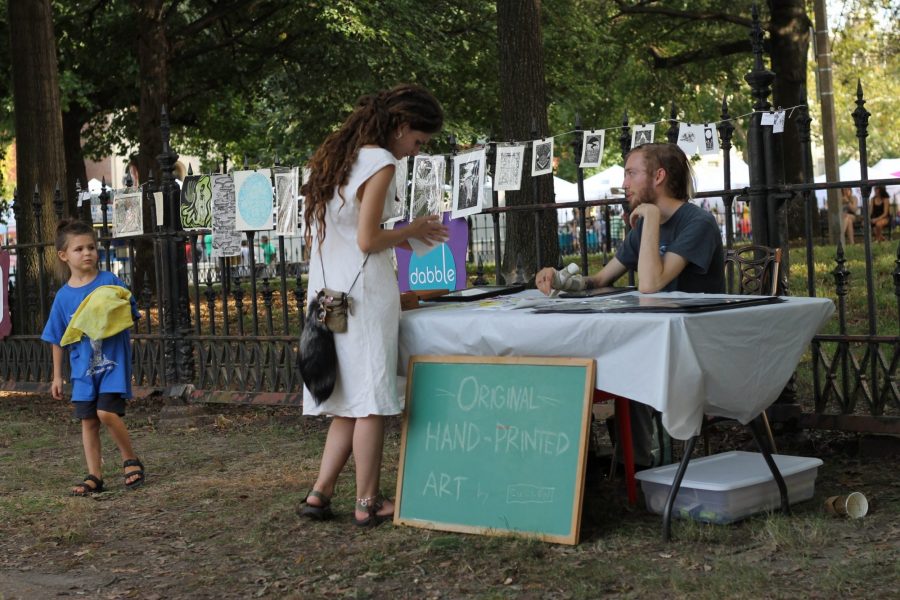 This was the gimmick….. everything was from a dumpster and nothing was for sale. This was history alive with potential and the Lafayette neighborhood embraced it’s unique history.

I even got a late night tour of 2323 Lafayette Drive! 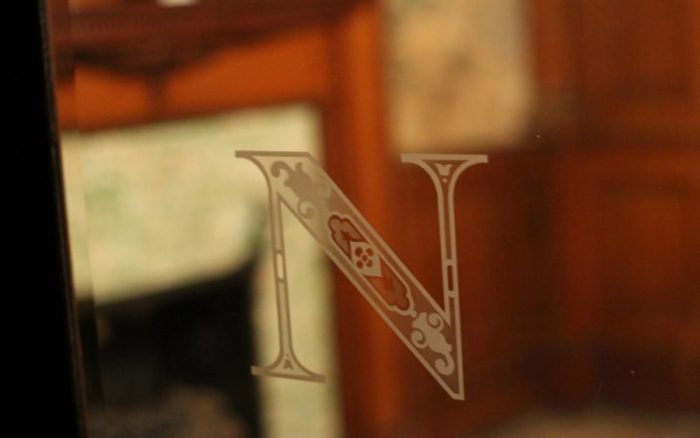 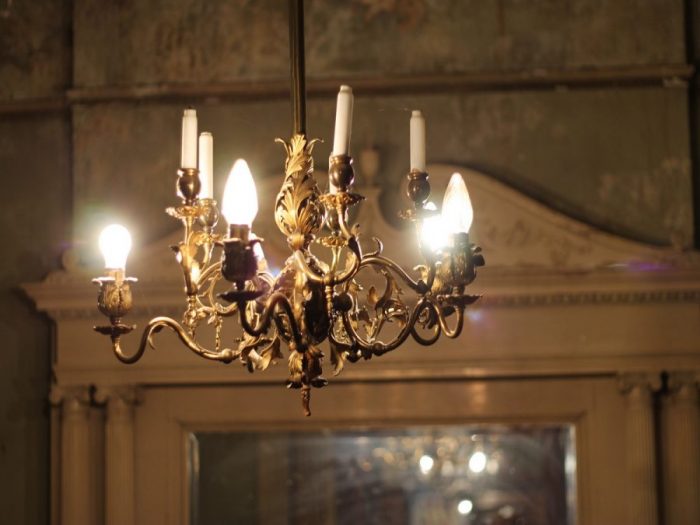 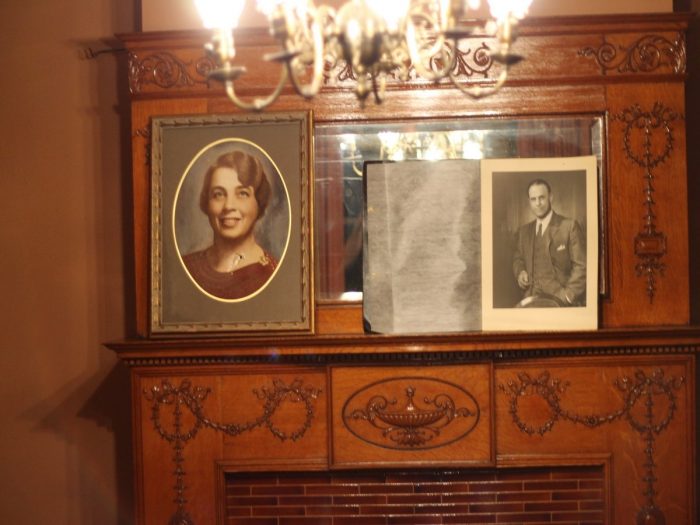 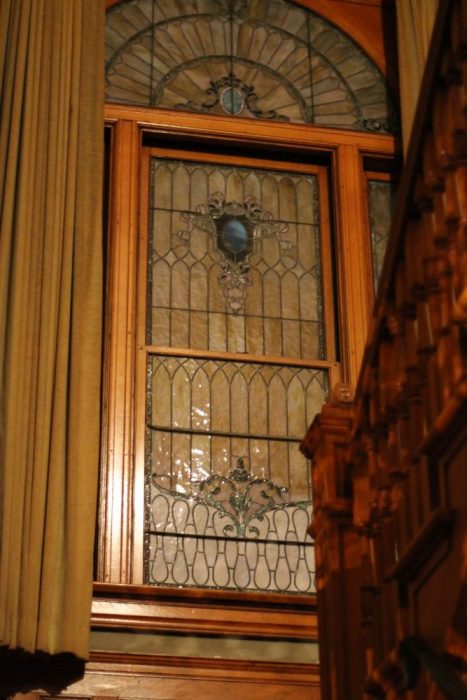 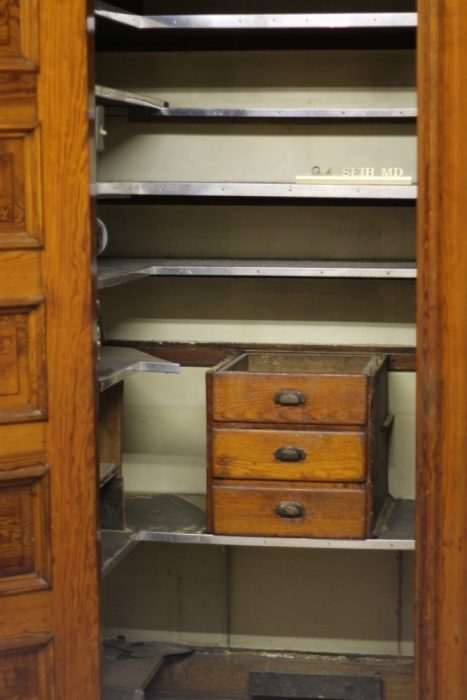 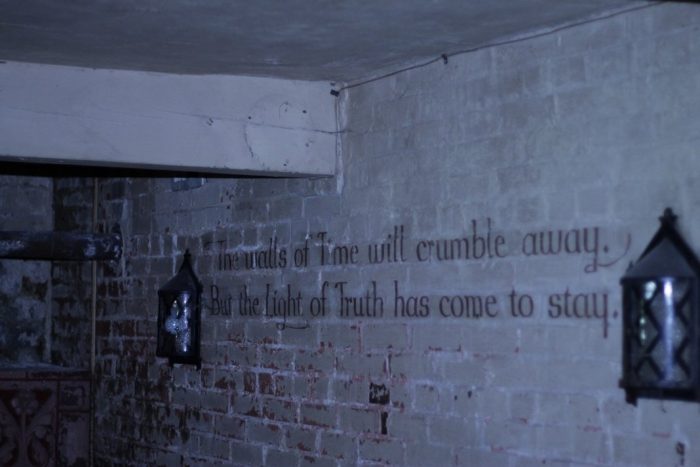 …the world needed to know this woman.

Her wisdom is wonderful, her poetry is divine.”

Whenever I meet the living relatives of the Death Purges, things get complicated and real emotions arise in varying degrees of acceptance. My favorite line from that time period in the project is “Are we to drag around leftover possessions of our loved ones like a ball and chain? In other words, how much do we keep of another’s life? The line is a subjective one for many people and a hang noose for others. Pain comes from remembering.

Even if Dumpster Diving is traditionally a scavenger way of life , it can offer treasures and legacy. When I expose the life of a real person with my conjecture and non-dualistic storytelling, it is akin to digging up a grave.

The Stories kept coming, sometimes in a trickle and sometimes like an explosion. After I found the paintings of Edward Menges, it was a busy time of artistic exploration and tuning my heart towards the emotional beat of a storyline. Queen Mabel shifted everything and it made more sense to tell little stories, heart-felt homages about the output of a life well lived.

Mabel the Queen of Dogtown

Dumpster Archeology shifted towards new forms of storytelling, like Biomythographeology and the Digital Magazines, to work the magic in a way that does less harm to the Living relatives. The Project can become anything it needs to be and if the morph-ability of narratives can shift to protect the privacy of Souls I am attempting to honor, then maybe I am not so crazy for saying I am not in charge.

The Journey of the Project has been bumpy and has uncovered the strange genius art of Ed Menges, Randy Titus and Dr. Jensen, Told stories about Saxophones, Nameless sons and Special Olympics medals. The Project has uncovered heroes… in my opinion and I can’t stop my fanboy rants about these wonderful Characters.

As I confronted Femininity in the faces of Mabel Fiztwater, Maude Witthall, Sarah Jane, the Widow Menges and all the women of the project, I also explored fatherhood, wealth, fame, marginalization, magic and family. Through the looking-glass of other people’s words, deeds, public record and personal possessions, I found humanity.

Covid Edition and the end of Dumpster Diving

This has been a Retrospective of Dumpster Archeology, which is not just one object, or even one story but the imprint of Humans in the St Louis area, discovered hours before trash oblivion and saved for our collective understanding. This process can be done, anywhere, by anyone, all one does is dig in the trash and find a story. I have to believe the Art of telling that story, is the essence of the whole thing.

…..and the Project continues down the Rabbit Holes…